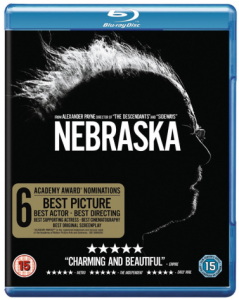 Paramount Home Entertainment has confirmed that another of this year’s most critically acclaimed films, Nebraska, will be heading to Blu-ray from 14th April.

Nebraska has already won the Best Actor award at Cannes, and it’s also up for a further six Oscars, including Best Film. So, it comes as no surprise that this touching film from director Alexander Payne (Sideways, The Descendants) is viewed in some circles as “almost certainly his best”. Aging alcoholic Woody Grant (Bruce Dern) finds out he’s won a million dollars in a sweepstake. Accompanied by his son David (Will Forte), Woody embarks on an epic journey, travelling over 750 miles, from Montana to Nebraska to claim his winnings.

Beautifully filmed, and shot entirely in widescreen black and white, we’re sure this “extraordinary picture”, will look amazing on Blu-ray.

The special features are still to be confirmed, so check out Blu-ray.com for more information.