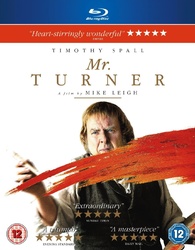 Mike Leigh’s BAFTA nominated Mr Turner is coming to Blu-ray in February and is available for pre-order now.

The film stars Timothy Spall as Joseph Turner, the iconic British artist who challenged the art world with his approach to painting. The film explores Turner’s eccentricities; his difficult relationships and personal demons.

The end result is riveting. Spall spent years with Leigh researching Turner to fully embody the artist. He learnt how to paint with a professional portraitist, and with the teacher’s help produced a full-size copy of Snow Storm – Steam-Boat off a Harbour’s Mouth, a painting that was the result of Turner being tied to a ship’s mast.  The film was critically acclaimed and Timothy Spall was crowned best actor at the Cannes Film Festival in May.

The Blu-ray comes with bonus material including a featurette revealing the Oscar nominated director Mike Leigh’s vision for the film. No doubt the transfer will add a new element of colour and depth to the paintings.