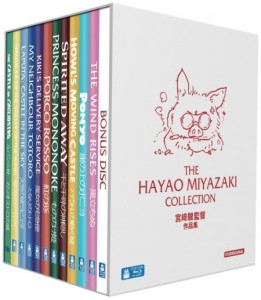 For the first time ever, it’s possible to buy a spellbinding collection of Hayao Miyazaki’s work. The 12-disc Blu-ray will be available in the UK on December 8th and brings together all 11 of his directed feature films – from Castle of Cagliostro through to The Wind Rises.

Miyazaki’s work appeals to both children and adults. His boundless imagination has given rise to Japan’s most popular manga, animated films and television series.

Miyazaki is often described as Japan’s equivalent to Walt Disney. He recently announced that he intended to retire from feature film production. This collection is a great way to celebrate his prodigious talent and become immersed in beautifully crafted storytelling, characterised by pastoral beauty, human innocence and darker themes of warfare and destruction.

Alongside the individual features comes a bonus disc with the full 90 minute press conference Miyazaki gave announcing his retirement and a look back on his career. It is also accompanied by a specially commissioned booklet with analysis, essays and commentary, as well as contributions from Miyazaki himself.