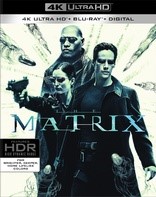 Warner Bros. Home Entertainment has announced that it will bring 90s sci-fi classic The Matrix to Ultra HD Blu-ray on 22nd May.

Starring Keanu Reeves, Laurence Fishburne, Carrie-Anne Moss, Hugo Weaving and Gloria Foster, and directed by the visionary Wachowski brothers, The Matrix was revered for its visually stunning special effects. Set in a dystopian near future, a computer hacker named Neo discovers that life on Earth may be nothing more than an elaborate façade created by a malevolent cyber intelligence. In the “real world”, humans are used as nothing more than fuel for the machines that rule. Neo joins like-minded rebel warriors Morpheus and Trinity in a bid to overthrow The Matrix and free the human race.

Both the Blu-ray and Ultra HD Blu-ray come with a number of special features, including an introduction by the Wachowski brothers, music videos, commentary and more.