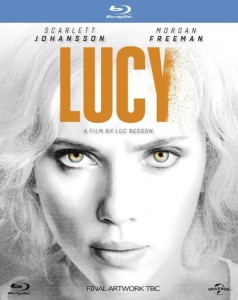 Lucy, the action-packed sci-fi thriller starring Scarlett Johansson and Morgan Freeman, will be packing a punch on Blu-ray in January.

Filmmaker Luc Besson has created some of the toughest, most memorable female action heroes in cinematic history. Lucy, like his other motion picture hits, from La Femme Nikita and The Professional to The Fifth Element, continues in this theme.

Scarlett Johansson, who plays Lucy, is accidentally caught in a dark drug deal. She turns the tables on her captors, gains psychokinetic abilities from a nootropic drug being absorbed into her bloodstream and transforms into a merciless warrior evolved beyond human logic.

The film was released in cinemas this summer and became a box office success, grossing over $458 million against a budget of $40 million.

The Blu-ray release of Lucy is presented in 1080p with DTS-HD Master Audio 5.1 surround. Special features include: the Evolution of Lucy and Cerebral Capacity: The True Science of Lucy.