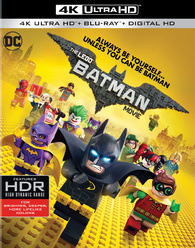 This year’s funniest family adventure – The LEGO Batman Movie – is due to arrive on Blu-ray and Ultra HD Blu-ray on June 13th.

The film stars Will Arnett, who reprises his role lending his voice to LEGO Batman, also known as Bruce Wayne. The film also features Zach Galifianakis, Michael Cera, Rosario Dawson and Ralph Fiennes, and is directed by Chris McKay.

The film tells the story of LEGO Batman, Gotham City’s lone vigilante, who protects the city’s residents alone. However, when the Joker – LEGO Batman’s mortal enemy – plots a hostile takeover of the city, our hero may have to lighten up a little and accept some much-needed help. It’s up to his sidekick Robin and loyal butler Alfred to help LEGO Batman ensure Gotham is protected.

The Blu-ray and Ultra HD Blu-ray editions come with a number of special features, including: