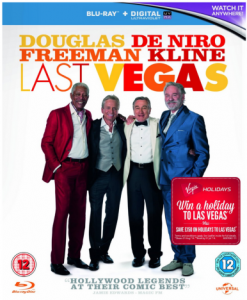 Last Vegas, director Jon Turteltaub’s touching comedy about growing old disgracefully, is set to hit Blu-ray in the UK from the 9th June.

Michael Douglas, Robert De Niro, Morgan Freeman and Kevin Kline appear as four sixty-something best friends in this geriatric take on the Hangover. The group decide to reunite for a crazy weekend in Vegas after the group’s final bachelor, Billy (Michael Douglas) at last decides to get hitched. With laugh-out-loud jokes and outstanding chemistry between the A-list cast, this is Blu-ray comedy at its best.

The Blu-ray will bring a unique insight into the exceptional cast, with a supplementary feature on each of the stars. It also features a piece on shooting the film and an audio commentary.

For a full Blu-ray review, head over to Blu-ray.com.