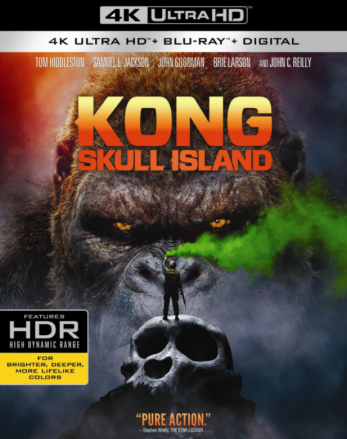 Warner Brothers Home Entertainment has announced that Kong: Skull Island, will be released on Blu-ray and Ultra HD Blu-ray on 18th July.

Featuring a suitably big cast made up of Tom Hiddleston, Samuel L. Jackson, Brie Larson, John Goodman and John C. Reilly, Kong: Skill Island is a fitting reboot for this famous monster. Set in 1971, the film follows a team of explorers and soldiers who hunt for a mythical island in the Pacific, following rumours that its inhabitants include prehistoric and monstrous creatures. Upon locating the island, it soon becomes clear that they are no longer at the top of the food chain.

Both the Blu-ray and the Ultra HD Blu-ray come with a whole heap of special features, including director’s commentary, a look at Tom Hiddleston’s role, a deep-dive into the film’s locations, deleted scenes and much more.