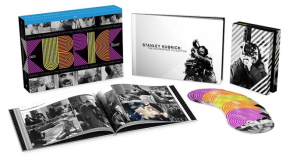 The late Oscar winner and five time nominee Stanley Kubrick always managed to turn heads with his latest movie releases. Typically adaptations of novels or short stories, his films were built with a unique attention to detail and dialogue rarely seen in cinema. Even today, his movies are amongst the greats that grace the IMDB top 250 list.

November 4th will see a very special Blu-ray release – Stanley Kubrick: The Masterpiece Collection. A set including all of Kubrick’s masterpieces from A Clockwork Orange to Eyes Wide Shut. The ten disc set includes eight classic Kubrick films, three previously released documentaries and two newly-produced documentaries: “Kubrick Remembered” and “Stanley Kubrick in Focus.” Also included is yet another documentary, “Once Upon a Time… A Clockwork Orange,” which is new to the U.S., and a 78-page hardcover photo book.

We’re particularly excited about the Kubrick Remembered documentary which gives viewers a new look into the Kubrick archives, with special appearances by Christiane Kubrick along with never before seen footage of Stanley’s work, his house and his film production facilities.

The set is exclusive to Amazon and has so far only been announced for the US – we’ll let you know if a wider release is confirmed. In the meantime, head over to HighDefDigest for more details.