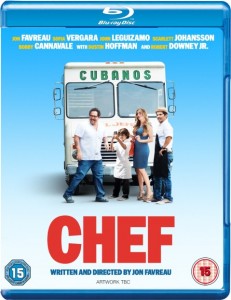 One of this summer’s more low-key cinema releases was Chef, directed by and starring Jon Favreau.  The culinary comedy, which received rave reviews in a summer surrounded by superheroes, intelligent apes and transforming robots, is due to hit Blu-ray from 3rd November.

The film, described as “wonderfully feel-good” by Heat magazine, marks something of a departure for Favreau, whose recent directorial efforts include blockbuster action hits Cowboys vs Aliens and the first two films in Marvel’s Iron Man franchise. Chef sees him star as frustrated chef Carl Casper, who rediscovers his love for cooking, and his estranged family, by opening  a food truck. Alongside Favreau, the cast includes the likes of Robert Downey Jr., Scarlett Johansson, Sofía Vergara, John Leguizamo, and Bobby Cannavale. The Blu-ray includes several deleted scenes, as well as a commentary from Favreau and real-life chef Roy Choi, who co-produced the film.

If you missed Chef during the busy summer of cinema, it’s definitely worth checking out on Blu-ray. But be warned – you might get hungry!