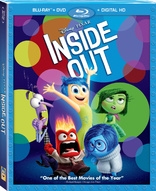 Walt Disney Home Entertainment has announced the Blu-ray launch date of this summer’s must-watch animated film, Inside Out. Directed by Pete Doctor, the man behind other Pixar greats, such as Monsters Inc and Up, Inside Out takes a hilarious look at what goes on inside our heads. The film follows Riley, an 11-year-old girl, who is led by her emotions – Joy, Fear, Anger, Disgust and Sadness. These emotions live inside the control centre inside her head, and help her live her life. However, all is not well in the control centre, as Joy, her main emotion, struggles to keep control as she moves to a new city, house and school.

The Ultimate Collector’s Edition Blu-ray will be available to buy on November 3rd. It will include a number of special features alongside the film, including exclusive Pixar short films, interviews with the cast and crew, audio commentary and a behind-the-scenes look at animation and film editing. For more information on the special features, head over to Blu-ray.com, where full information is available.

Check out the video below for a sneak peek at all new short Riley’s First Date, which will show how the whole family’s emotions react to Riley’s first experience of young love.