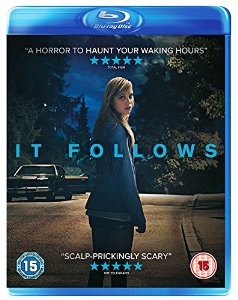 Indie horror movie, It Follows will be out on Blu-ray from 14th July. Dubbed “the best horror film in over a decade,” It Follows is directed by David Robert Mitchell (The Myth of the American Sleepover).

The spooky tale of young kids, being plagued with strange visions and an inescapable sense of being followed, after a sexual encounter, is credited with ushering in a new era of indie film success. Labelled the scariest movie of 2015, It Follows appeals to horror genre fans, art house cinema aficionados, and the general movie-going audience. With spectacular cinematography and a powerful score, it’s already being labelled as a cult classic.

Special features include a critics’ commentary hosted by Nerdist’s Scott Weinberg; a conversation with Film Composer Disasterpeace,  and a Poster Art Gallery.