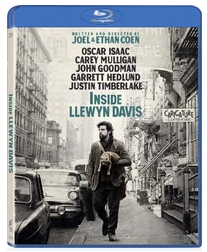 The Blu-ray special features for Inside Llewyn Davis, the Coen Brother’s artfully presented hipster take on New York’s 1960s folk scene, have at last been confirmed.

Set on the eve of the folk revival, Llewyn Davis (Oscar Isaac) is desperately trying to break through into the Greenwich Village music scene. Isaac gives a “subtle and pitch-perfect” performance, as Llewyn, a man who pushes himself, and everyone else around him to the edge of what they can tolerate in his quest to become a true artist.

Definitely one for the musically minded, this Blu-ray will come with a bonus 40 minute documentary with cast members and musical icons including Justin Timberlake, Carey Mulligan and Marcus Mumford, on the making of the film. All the music in the film was recorded live too, and is sure to sound incredible on Blu-ray. As if that wasn’t enough, this film was awarded the New York Film Critics’ Circle Award for Best Cinematography last month, so it’s sure to look incredible in high definition.

We’re still waiting for a European release date, so keep an eye on Blu-ray.com.