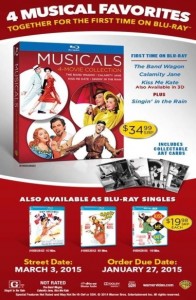 Here’s a perfect way to spend a rainy afternoon: watching three iconic Golden Age films on Blu-ray: Kiss Me Kate (1953), Vincente Minnelli’s The Band Wagon (1953) and David Butler’s Calamity Jane (1953). With the new format, these old films will provide a real musical treat; an opportunity to feast on the glamour of a bygone age and marvel at how modern technology can breathe new life into some cherished classics. Kiss Me Kate in particular offers a brand new experience, as it’s been converted into 3D for the first time.

Warner Bros. is bringing these films to Blu-ray via three individual releases and a Musicals 4-Movie Collection (which also includes Singin’ in the Rain). All three films are set to make their US Blu-ray debut on 3rd March 2015.

If you haven’t seen them before, here’s a quick run-down of each:

At his New York apartment, actor Fred Graham and composer Cole Porter discuss plans to recruit Fred’s ex-wife, actress Lili Vanessi, to star in their new show, Kiss Me Kate, a musical version of William Shakespeare’s “The Taming of the Shrew.” Lili arrives, and after singing the love duet with Fred, agrees to consider taking the role of Katherine. They are interrupted by the arrival of flashy dancer Lois Lane, who has used her wiles on Fred to secure the role of Bianca. Jealous words fly between the two women, and Lili prepares to leave, after informing Fred that she is going to be married soon. The film stars Ann Miller, Kathryn Grayson, Howard Keel, Tommy Rall, Keenan Wynn and James Whitmore.

Tony Hunter, a fading film star decides to return to his former glory, the Broadway stage. His playwright-songwriter friends introduce him to Broadway’s hottest director, Jeffrey Cordova, who proves that the “new” theatre traditions can be an awkward fit with the old. The film stars Fred Astaire, Cyd Charisse, Oscar Levant, Nanette Fabray, James Mitchell and Robert Gist.

Jane promises the citizens of Deadwood that she can persuade classy Chicago stage star Adelaide Adams to perform at the local opry house. Through a case of mistaken identity, Jane brings Adelaide’s maid Katie back to town. Katie proves to be a success all the same, and out of gratitude promises to make a lady out of Jane, who is sweet on Lt. Gilmartin. The film stars Doris Day, Howard Keel, Allyn Ann McLerie, Philip Carey, Dick Wesson and Paul Harvey.

More information on the set can be found at Broadway World.