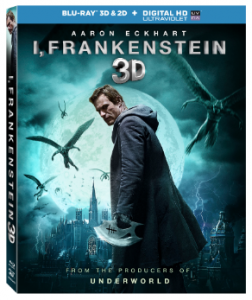 The special features for I, Frankenstein, director Stuart Beattie’s vivid reimagining of Mary Shelley’s gothic tale about a man made monster has been confirmed by Lionsgate.

This movie kicks off in a dystopian present, two hundred years after Victor; the creator of Frankenstein’s monster, has died.  The monster, Adam Frankenstein (Aaron Eckhart), is forced to battle against gargoyles and demons to survive. We’re excited to see how the “crystal clear 3D effects” and “gorgeous cinematography” will look on Blu-ray 3D.

The Blu-ray 3D will feature extras on creating the monsters in the movie, as well as a director’s commentary.

We’re still waiting to find out when the Blu-ray will hit the shelves in Europe, so keep an eye on Blu-ray.com for more information.