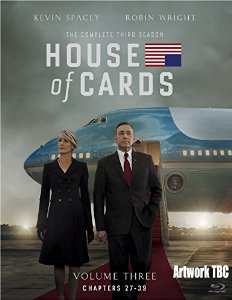 The third season of the critically-acclaimed political drama House of Cards will be available on Blu-ray from June 29th.

In the third season of the Netflix phenomenon, Frank Underwood (Kevin Spacey) fights to secure his legacy. He remains a ruthless and cunning political strategist who will stop at nothing to conquer the halls of power in Washington D.C. He is joined by his wife Claire (Robin Wright), who is elegant, ambitious, and equally conniving. In this season, the biggest threat the couple face is contending with each other.

Special features include an extensive behind-the-scenes look into the creation of House of Cards Season 3 and a new featurette exclusive to the Blu-ray Disc edition titled “A Death in New Mexico”, which chronicles the making of the finale episode (Chapter 39).