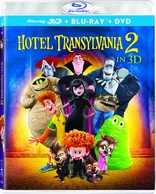 Sony Pictures Home Entertainment has announced the Blu-ray release of Hotel Transylvania 2, which will be available in the UK from 15th January 2016.

Hotel Transylvania 2, the sequel to the 2012 animated comedy directed by Genndy Tartakovsky, stars Adam Sandler, Selena Gomez, Steve Buscemi and Kevin James. Picking up where the original left off, we follow newlyweds Mavis and Jonathan, a vampire and human couple who fell in love despite the disapproval of Mavis’s dad, Count Dracula.

As Mavis and Jonathan welcome a new baby boy, Dennis, in to the world, Dracula hopes that it will follow in his blood-sucking footsteps. However, when it becomes apparent that he’s more human than supernatural, Dracula hatches a plan with his ghoulish friends to put Dennis through his paces.

The Blu-ray comes with a number of special features, including a music video from American pop group Fifth Harmony, original sketches of the characters, and sing along Monster Scary-Oke.