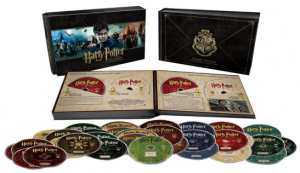 Good news for Potterheads this week, as Warner Bros revealed the Harry Potter Hogwarts Collection, a colossal 31 disc set featuring all eight Harry Potter movies and more than 40 hours of bonus content, will be coming to Blu-ray next year.

Daniel Radcliffe, Rupert Grint and Emma Watson lead an all-star cast in this epic eight-film series adapted from J. K. Rowling’s much loved tales about witches and wizards. From fledgling students to masters of magic, the gang take on fire-breathing dragons, Dementors, centaurs and the evil Lord Voldemort (Ralph Fiennes) in an effort to protect the fate of the wizarding world.

In addition to the mind-boggling 37 hours of additional content already released, the Blu-ray will also come with never before seen extras. The new footage includes features exploring how production designer Stuart Craig brought J.K. Rowling’s magical realm to the big screen as well as some  candid and emotional stories about the final days on set from the crew.

The set is due to hit US shelves in late February, withh a European release date likely to follow. For more information, check out SnitchSneeker.com.