Get the candles out, today is Barack Obama’s 54th Birthday! To celebrate, we have listed our five favourite fictional Presidents, all of whom can be watched on Blu-ray. Do you agree? Have we missed any? Let us know in the comments!

When a bunch of pesky Martians decide to visit Earth, President James Dale is the man in charge. Played by Jack Nicholson, President Dale attempts to stop an all-out-war, exacerbated by both the Martians and his own General Decker. Dale’s famous “why can’t we all just get along?” speech is enough to reduce even the fearless Martian Leader to tears.

It appears that the time for a President to step up is when danger comes from outer space, and President Beck in Deep Impact is no different. In Deep Impact, a meteor is hurtling its way towards Planet Earth, which will destroy every living thing on the surface. Morgan Freeman – who was judged by Forbes to have the world’s most trustworthy voice – plays President Beck. With a voice like that, who else would you want to tell you that the world might end?

Arguably one of the most famous on-screen Presidents, Josiah ‘Jed’ Bartlet was played by Martin Sheen throughout The West Wing’s seven series. Telling the stories of the people who work in this fictitious White House administration, The West Wing has received widespread praise, even winning two Emmy awards, both of which were awarded to Sheen. Our favourite Jed moment has to be the end of season two, as he makes his speech over the top of Dire Straits’ Brothers in Arms. Powerful stuff.

Air Force One tells the story of a terrifying mid-air hijack of Air Force One by Russian terrorists, in which the President’s family and staff are held at gunpoint. However, these Russians picked the wrong President to mess with, as President James Marshall – played by Harrison Ford – is a former Medal of Honour winner who doesn’t take too kindly to uninvited guests. Watch out for the famous “get off my plane!” line. 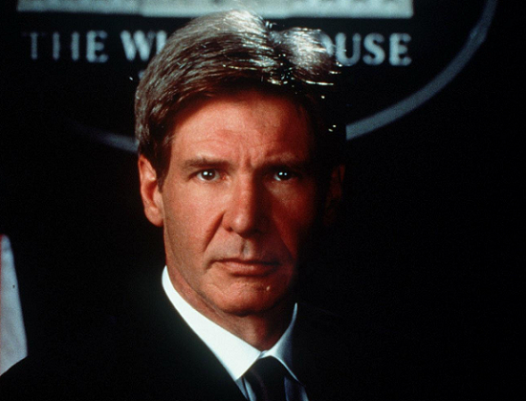 No list would be complete without mentioning President Thomas J. Whitmore, who must lead America and the rest of world against a violent invasion carried out by extra-terrestrials. Bill Pullman’s performance as Whitmore crescendos as he delivers a rousing speech to an army of pilots about to make a last stand against the invaders. A true hero.