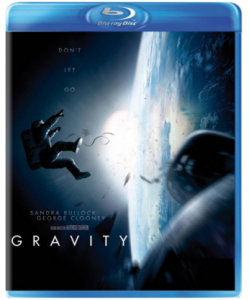 It’s been a great week for the technically brilliant sci-fi masterpiece Gravity, with 10 Academy Award nominations and a Blu-ray release date confirmed for 3rd March.

Sandra Bullock stars as Ryan Stone, a medical engineer on her first shuttle mission into space. Ryan’s accompanied by veteran astronaut Matt Kowalski (George Clooney) who’s on his last flight before retirement. During a routine spacewalk, something goes terrifyingly wrong and the pair are forced into a gripping struggle for survival as they are flung out, attached only to each other, into space.

The movie was shot by Children of Men and Harry Potter director Alfonso Cuarón to create the most convincing portayal of space ever seen. The Blu-ray also provides a unique insight into shooting this extraordinary movie, with features on how to film Zero G, an overview of space tech and shot breakdowns. This is one Blu-ray to watch on the largest screen possible- and if you’ve got a compatible TV, make sure you go for the 3D version!