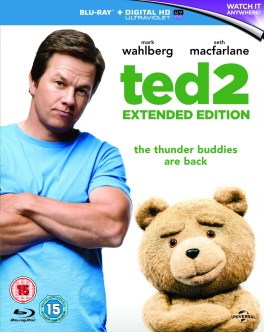 Universal Pictures Home Entertainment has announced the launch date of Ted 2 as the 23rd November in the UK, with the rest of Europe to follow shortly after.

Ted 2 is set after the events of the first film, however life has changed dramatically for both John (Mark Wahlberg) and his best friend and teddy bear, Ted (Seth MacFarlane). John is dealing with the fallout of his recent divorce, while Ted is busy trying to stop his marriage with the love of his life, Tami-Lynn (Jessica Barth), going the same way. In order to save their relationship, Ted and Tami-Lynn decide to adopt a child, something which proves problematic when the government classify Ted as property and not a person, removing all his civil rights. However, determined to turn his marriage around, Ted enlists the help of a young lawyer (Amanda Seyfried) and a veteran civil rights attorney (Morgan Freeman) to help him fight the case.

Much like the first film, Ted 2 is full of outrageous laughs from start to finish and is sure to please fans of Mark Wahlberg and Seth MacFarlane alike.

The Blu-ray will come with a number of special features, including some HD-only exclusives:

Are you excited to see Ted’s return on Blu-ray? Let us know in the comments.