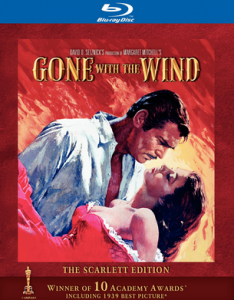 Warner Bros has announced it will bring an Ultimate Collector’s Edition of Gone with the Wind to Blu-ray to celebrate its 75th birthday.

One of the most iconic movies from Hollywood’s golden era, Gone with the Wind collected a record ten Academy Awards when it was originally released in 1939, and still receives critical acclaim today. It is a romantic epic set in the South in the midst of the American Civil War. The tempestuous relationship between the unashamedly self-centred southern belle Scarlet O’Hara (Vivienne Leigh), and the roguish Rhett Butler (Clark Gable) takes centre stage.

The special features are set to include footage of Clark Gable and Vivien Leigh attending the original movie premiere in Atlanta, and a documentary on how “the South” changed over the years. There will only be a limited number of the 75th Anniversary Ultimate Collector’s Edition Blu-rays available, making it a must-have for fans of the original film.