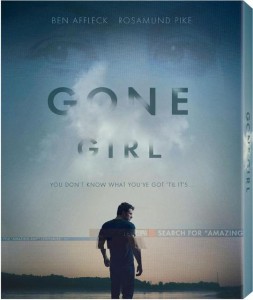 Gone Girl, one of 2014’s most eagerly-anticipated and well-received thrillers, is heading to Blu-ray. The big screen adaption of the smash hit novel is due to hit UK and European shelves from February 2nd.

Starring Ben Affleck and Rosamund Pike, Gone Girl tells the dark and sometimes disturbing tale which unearths the secrets at the heart of a modern marriage. On the occasion of his fifth wedding anniversary, Nick Dunne (Ben Affleck) reports that his beautiful wife, Amy (Rosamund Pike), has gone missing. Under pressure from the police and a growing media frenzy, Nick’s portrait of a blissful union begins to crumble. Soon his lies, deceits and strange behaviour have everyone asking the same dark question: did Nick Dunne kill his wife?

Directed by David Fincher (Fight Club, The Social Network, Seven) from a script written by the novel’s author Gillian Flynn, Gone Girl wowed critics upon its release, with Variety calling it “surgically precise, grimly funny and entirely mesmerizing”. The strong performances from the central cast are already generating some serious awards buzz, with Rosamund Pike’s startling turn as Amy coming in for particular praise.

On the Blu-ray, you can expect a full length director’s commentary from Fincher and lossless 7.1 audio alongside the full HD presentation of the film. US viewers will also get a physical ‘Amazing Amy’ book as seen in the film, though this isn’t yet confirmed for the European release.

Check out High-Def Digest for more on what could be one of 2015’s biggest Blu-ray thrillers.