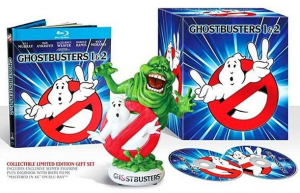 It has been confirmed that Ghostbusters, the 1984 classic starring Bill Murray, Dan Aykroyd and Sigourney Weaver, will be released on Blu-ray for a special 30th Anniversary Edition that also includes the sequel.

When their funding grant is cut, three parapsychologists decide to set up shop as Ghostbusters. Convinced that ghosts exist and are a threat, the trio set about ridding New York of ghouls and poltergeists in the face of relentless ridicule. However, the initial scorn soon transforms into celebrity when they are proved right and paranormal activity goes through the roof with New York becoming infested by ghosts. But with sceptical and interfering officials and a larger, more powerful threat lurking in the background, the Ghostbusters are seemingly the only ones who can prevent the apocalypse. A true classic of 80s cinema, packed with laughs and memorable lines, this is a real treat on high-definition Blu-ray.

In addition to both movies, the 30th Anniversary Edition will come with a gallery of artwork and the Ghostbusters music video. It will also feature a roundtable discussion with writer Dan Aykroyd and director Ivan Reitman.

We are still waiting for a European release date, so head to Den of Geek for further details.