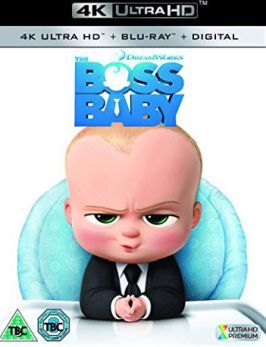 Twentieth Century Fox and DreamWorks Animation have officially announced the Blu-ray and Ultra HD Blu-ray release of The Boss Baby, which hits shelves on July 25th.

Featuring the voices of Alec Baldwin, ViviAnn Yee, Eric Bell Jr., Steve Buscemi, and Lisa Kudrow, The Boss Baby follows the story of seven-year-old Tim Templeton, who suddenly finds himself with a new baby brother. However, this is no normal sibling; dressed in a suit and toting a briefcase, he’s in charge and is keen to let everyone know it. But not all is as it seems, when Tim discovers that Boss Baby is actually on a secret mission, leading Tim and his pint-sized sibling on an epic adventure neither will forget.

The Blu-ray and Ultra HD Blu-ray both come loaded with bonus extras, including a 3-minute action-packed journey through time featuring Boss Baby and Tim. You will also find deleted scenes, featurettes about the making of the film, and much more.