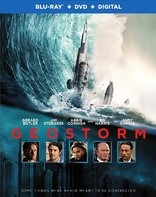 Following a series of unprecedented natural disasters, the world’s leaders collaborate to create a network of satellites that control the global climate, keeping everyone safe. But something goes wrong, causing the satellites to malfunction and attack the very planet they were designed to protect. Butler stars as a scientist, who is tasked with diagnosing the issues with the satellites before the Earth is wiped out.

The Blu-ray comes with a number of special features, including a look at the research and technology that went into the film’s cutting edge special effects, a deep dive into the creative process that led to the birth of Geostorm, and a discussion with the cast and crew.