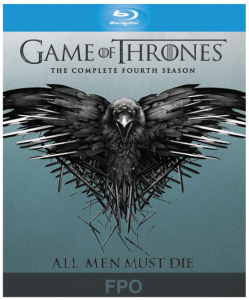 The latest instalment of HBO’s Emmy Award winning drama, Game of Thrones, has been confirmed on Blu-ray.

The fourth season of the hit fantasy epic opens in the fictional Seven Kingdoms of Westeros and follows the struggles among the realm’s families for control of the Iron Throne. Largely based on George R.R. Martin’s epic fantasy novel, A Clash of Kings, this latest instalment racks up the drama, action, political intrigue, romance and shock plot lines.

The Blu-ray will come complete with an in feature resource that provides background information about each of the on-screen characters, locations and relevant histories. There will also be a piece where you can learn about the mythology of Westeros, as told from the varying perspectives of the characters themselves.

We are still waiting for a European release date, so head to WetPaint.com.