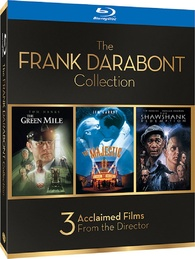 Warner Brothers has announced that a collection of classic films directed by Frank Darabont is on its way to Blu-ray.

The set will include two of Darabont’s Stephen King adaptations, The Shawshank Redemption (cited by many as one of the best films of all time) and The Green Mile, as well as the Blu-ray debut of The Majestic, starring Jim Carrey.

The set is due for release in the US next February, but a European release hasn’t yet been confirmed. We’ll let you know when we hear more.