Not entirely surprising but deeply satisfying, Marvel has confirmed that Sherlock star Benedict Cumberbatch will play Doctor Strange. The film is due for release on November 16th. To get into mood, why not immerse yourself in Marvel comic inspired films this weekend?  With Blu-ray, they’ve upped the ante on guilty pleasure quality. 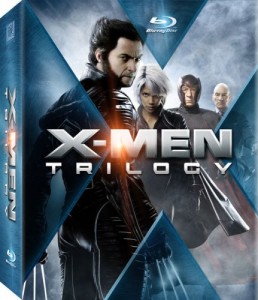 The X-Men Trilogy is well worth watching consecutively. Now available as a box-set, this is a perfect way to spend a cold and blustery Saturday.

The first two films especially were lauded for their dark, realistic tones, and subtexts dealing with discrimination and intolerance.

The X-Men are born into a world filled with prejudice. They possess extraordinary and dangerous powers as a result of unique genetic mutations. Cyclops (James Marsden) unleashes bolts of energy from his eyes. Storm (Halle Berry) can manipulate the weather at will. Rogue (Anna Paquin) absorbs the life force of anyone she touches. But under the tutelage of Professor Xavier (Patrick Stewart), these and other outcasts learn to harness their powers for the good of mankind. However, Xavier’s philosophy is at odds with the nefarious Magneto (Ian McKellen) who believes humans and mutants can never co-exist. Super-charged battles ensue. 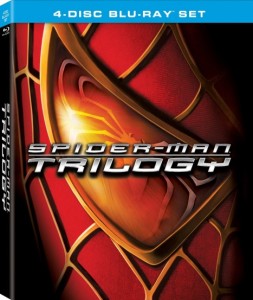 Another Marvel favourite, the revamped Spiderman franchise just keeps on giving. The first instalment of the trilogy follows the transformation of an average teenager, Peter Parker, into an extraordinary superhero after he is accidentally bitten by a radioactive spider. When his beloved uncle is  murdered during a robbery, Peter vows to use his powers to avenge his death. Using his spider strength and dexterity he sets about ridding the streets of crime, bringing him into conflict with malevolent super-villain “Green Goblin.”

Spider-Man 2 chronicles the struggles of leading a double life. Peter Parker, (Tobey Maguire) tries to give up his crime-fighting identity but a ruthless, new villain, the multi-tentacled Doc Ock, forces Peter to swing back into action to save everything he holds dear.

The third instalment in this trilogy sets the scenes for the most terrifying villains Spiderman has ever encountered–the deadly Sandman, the New Goblin, and Venom – plus the enemy he discovers within himself.

The Blu-ray transfer is impressive. The films splatters the screen with colour, action and frenetic swinging through the city streets.

Nick Fury, Director of the international peacekeeping agency known as S.H.I.E.L.D., found himself in need of a stellar team to pull the world back from the brink of disaster. Spanning the globe, a daring recruitment effort began.