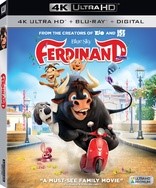 From the creators of Ice Age and Rio comes the most love-a-bull comedy of the year – Ferdinand! Ferdinand – a giant bull with a big heart – is mistaken for a dangerous beast, and is unceremoniously torn from his home. In order to find his way back, he rallies a band of misfit friends and embarks on the ultimate adventure to locate his family. Based on the classic children’s book by the same name, Ferdinand proves you can’t judge a bull by its cover.

With John Cena, Kate McKinnon, Gabriel Iglesias, Carlos Saldanha and David Tennant all lending their voices to the film, this is one you don’t want to miss.

The Blu-ray and Ultra HD Blu-ray both come with a number of special features: