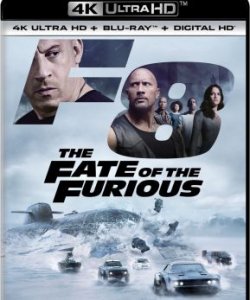 One of the biggest action franchises in the world gets its latest instalment when The Fate of the Furious comes to Blu-ray and Ultra HD Blu-ray on July 11th.

Starring Vin Diesel, Michelle Rodriguez, Dwayne Johnson, Jason Statham and Oscar winner Charlize Theron, The Fate of the Furious picks up following the events of the last film. Now that Dom (Diesel) and Letty (Rodriguez) are married, and the rest of the crew have been exonerated, it seems like they have found a way to live a normal life. However, when a mysterious woman (Theron) lures Dom back into the world of crime, he’s forced to make some difficult choices, as the crew face new trials that will test them as never before.

The Blu-ray and 4K Ultra HD Blu-ray will come with a bundle of special features under the hood, including a look at the stunts, extended fight scenes, an in-depth feature about the cars, audio commentary and more. Also included is a never-before-seen extended cut by director F. Gary Gray.