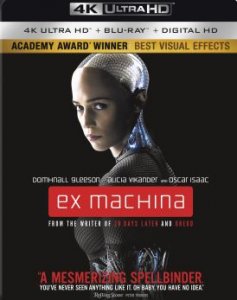 You’ll soon be able to experience the 2015 Oscar winner for Best Visual Effects, Ex Machina, in the most vivid way possible when it arrives on 4K Ultra HD Blu-ray Combo Pack on 6th June.

Starring Domhnall Gleeson, Alicia Vikander and Oscar Isaac, Ex Machina tells the story of Caleb, a low level programmer who wins a competition to spend a week at the mountain estate of his company’s brilliant CEO. Upon arrival, he’s sworn to secrecy and is totally cut off from the outside world. The real reason behind is presence is then revealed: a seductive android whom he is to befriend in the ultimate Turing test. What follows is an experiment beyond his wildest dreams in this epic, heart-stopping thriller.

The 4K Ultra HD Blu-ray comes with a number of special features, including a five-part featurette on the making of the film, a look behind the scenes, Q&A with the cast and crew, and a secret Oscar Isaac dance scene.