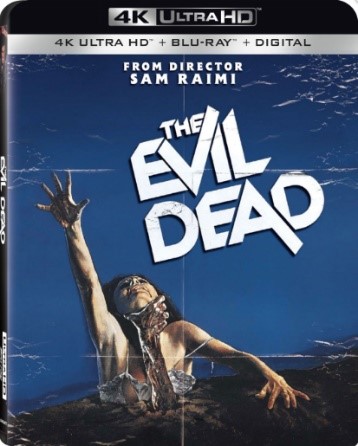 Lionsgate Home Entertainment has officially announced an Ultra HD Blu-ray release for the 80’s cult classic Evil Dead (1981). Sam Rami’s iconic horror stars the one and only Bruce Campbell alongside Ellen Sandwiss, Richard Demanicor, Betsy Baker and Theresa Tilly. Fans will be pleased to hear that Evil Dead 4K Blu-ray edition will be available for purchase on October 9th.

Ashley “Ash” Williams (Campbell), accompanied by his beloved girlfriend and three closest pals, travels into the woods to spend a night in a secluded cabin. Within this cabin they will find the ancient book, the Necronomicon, whose scripture reawakens the dead when read aloud. The gang mistakenly unleash a barrage of evil and must fight the flood of the living dead to avoid becoming one themselves. Ash is forced to watch his friends become possessed one by one and must make difficult decisions to save himself before the day breaks.

Now, for the first time ever, fans get to experience the heart stopping, relentlessly shocking and nonstop mayhem of this original masterpiece in 4K.