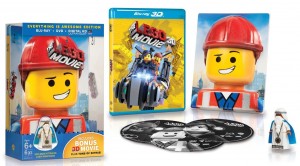 The Lego Movie, one of 2014’s critically acclaimed box office smashes, is on its way to Blu-ray. An exact European date hasn’t been set, but Warner Bros has revealed details and packshots for a variety of different Blu-ray packages.

When it hits Blu-ray later this year, expect to see three different packs on shelves. As well as a pack comprising a standard 2D Blu-ray plus digital UltraViolet copy, there’ll be a version including a Blu-ray 3D, and then a limited “Everything Is Awesome” edition (pictured) which adds a DVD copy, Vitruvius minifigure and a collectible 3D Emmet photo.

Special features are yet to be confirmed, but with such stunningly created visuals this is one we’re already looking forward to seeing at home in high definition.