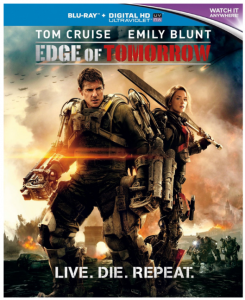 One of this summer’s biggest blockbusters, the Edge of Tomorrow, is set to be released on Blu-ray from 13th October in the UK.

Starring Tom Cruise and Emily Blunt, this fun film features impressive special effects and a boom-bastic finale. Set in the near future, earth has been overrun by an unbeatable alien army. Major William Cage (Tom Cruise) is given a deadly mission to defeat the alien invaders, which throws him into a time loop with Special Forces warrior Rita Vrataski (Emily Blunt).

The special features are still to be confirmed, so we will let you know if we hear more.