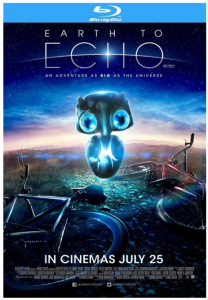 Inseparable high school friends Tuck (Brian Bradley), Munch (Reese Hartwig) and Alex (Teo Halm), are forced to leave their homes to make way for the construction of a new highway. However, two days before the boys are due to leave, they receive a series of encrypted text messages, which leads them to discover an alien in desperate need of their help.

We’re sure Earth to Echo’s “dazzling special effects” will look amazing in high definition on Blu-ray. The Blu-ray will also include extras on casting the characters, and crafting the scenes in the movie.

A release date is still to be confirmed, but the Blu-ray should be released later this year. If you like family sci-fi adventures with a twist, this is definitely one to check out. Blu-ray.com has further details.