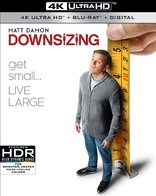 Starring Matt Damon, Kristen Wiig, Jason Sudeikis, Christoph Waltz and Alec Baldwin, the film follows the story of Paul (Damon) and his wife Audrey (Wiig), who live a life full of stresses. But, when a scientific breakthrough gives humans the ability to shrink down to just five inches tall as a solution to overpopulation, Paul and Audrey see a way out. The pair shrink down and start a new life in a downsized community – a choice that will trigger life-changing adventures.

Both the Blu-ray and Ultra HD Blu-ray come with a number of special features: