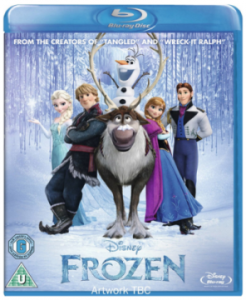 After much anticipation, we’re pleased to say the special features for Disney’s latest animated tale, Frozen, have been confirmed.

Based on Hans Christian Andresen’s legendary fairytale The Snow Queen, Frozen gives this classic tale a twist for the twenty first century. Kristen Bell stars as Anna, a strong willed Princess who is tasked with the mission of bringing her younger sister, Elsa (Idina Menzel) home after her icy powers have bought eternal winter to their Kingdom. This enchanting story takes Anna on a magical journey, where she encounters a charmingly friendly reindeer, talking snowmen and even an abominable iceman. The film has proved to be another hit for Disney, pulling in huge audiences around the world and garnering two Oscar nominations.

The Blu-ray speical features will include music videos by artists Demi Lovato, Martina Stoessel and Marsha Milan Londoh. These “heart-popping musical numbers” are going to sound fantastic in DTS HD Master Audio. As if that wasn’t enough, the Blu-ray disc will also come with deleted scenes, a director’s commentary and a piece on modernising the original fairytale.

The release date hasn’t been confirmed yet, but we’ll keep you posted when Disney announces further details.