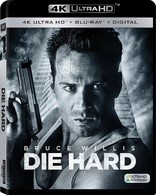 Twentieth Century Fox Home Entertainment has officially announced that it will celebrate the 30th anniversary of John McTiernan’s classic Die Hard, with a brand new Ultra HD Blu-ray release of the film, available 15th May.

Die Hard is Bruce Willis’s first outing as John McClane, a hardened NYPD cop who travels to Los Angeles on Christmas Eve to find his estranged wife. However, he soon finds himself in a deadly standoff with armed terrorists, after they storm the building his wife’s Christmas party is in. Led by the fearsome Hans Gruber, played by the late Alan Rickman, the terrorists take everybody hostage, except for McClane, who manages to slip free. Alone (and barefoot), McClane must work singlehandedly to take down Gruber and his thugs before it’s too late.

The Ultra HD Blu-ray comes with a number of special features, including commentary by director John McTiernan, an interactive style gallery, trailers, and more.