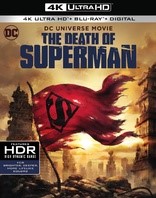 Warner Bros. Home Entertainment has announced that it will release The Death of Superman on Blu-ray and Ultra HD Blu-ray on 7th August.

Featuring the voices of Jerry O’Connell, Rosario Dawson, Nathan Fillion, Christopher Gorham and Jason O’Mara, this animated take on the DC Comic by the same name sees a monstrous creature stir from the depths of the Earth. As this colossal force of nature rampages across the planet, the Justice League are called into action. However, it soon becomes apparent that only Superman can stand in this unstoppable monster’s way. Battling their way across America, the two eventually end up in the heart of Metropolis for a final showdown.

Released on Ultra HD Blu-ray for the first time, witness this incredible battle like you’ve never seen it before. The Ultra HD Blu-ray also comes with a number of special features, including a sneak peek at DC Universe’s next animated adventure, an analysis of the battle with a martial arts expert, and more.

Check out the Blu-ray trailer below.