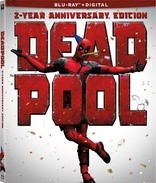 Twentieth Century Fox Home Entertainment has announced that it is marking the two year anniversary of the release of Deadpool with a special Ultra HD Blu-ray SteelBook edition, available now.

Ryan Reynolds stars as Wade Wilson, a retired Special Forces operative who spends his days earning money as a ruthless mercenary. When he is diagnosed with terminal cancer, he enlists the help of a mysterious stranger who claims to be able to cure him. With nothing left to lose, he puts his life in the hands of a man known as Ajax, who claims to be able to force his body into mutating and healing itself. What happens changes Wilson’s life forever, forcing him to adopt his wisecracking alter ego, Deadpool.

Based on the Marvel comic of the same name, Deadpool brings his unique brand of fourth-wall smashing irreverence to the big screen in some style. Featuring outrageous jokes (often at the expense of the cast and crew) and blistering action, Deadpool shakes up what you’d expect from the superhero movie template.

The Ultra HD Blu-ray SteelBook features all-new collectible packaging and an assortment of limited edition gifts including stickers, car decals, temporary tattoos and a set of paper dolls that will allow fans to bring even their most depraved Wade Wilson fantasies to life.

Also included is a bundle of special features: