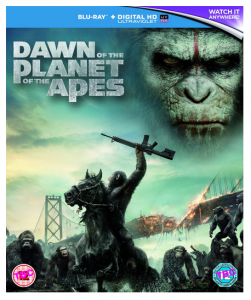 The sequel to the critically acclaimed Rise of the Planet of the Apes is set to launch on Blu-ray and Blu-ray 3D from the 24th November.

Director Matt Reeve’s tense, thoughtful sci-fi is set in a post-apocalyptic world inhabited by humans and hyper-evolved apes. Ten years after a deadly disease has ravaged the planet and destroyed much of the human population, the humans and apes are living side-by-side in an uneasy peace. The humans are holed up in a basement on the edge of San Francisco, but after their food supplies begin to run out, they are forced into direct conflict with the apes with disastrous consequences for both species.

Dawn of the Planet of the Apes has been described by critics as “without question the movie of the summer” “visually brilliant” and “one of the most thrilling reboots in cinema history”. The Blu-ray and Blu-ray 3D will feature deleted scenes, a director’s commentary as well as a piece on casting.