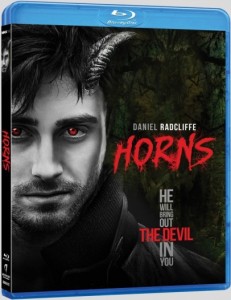 Horns, the offbeat supernatural thriller starring Daniel Radcliffe, is heading to Blu-ray early next year – hitting the US in January and UK in March.

Based on the bestselling novel by Joe Hill (son of Stephen King), Horns see Radcliffe take another bold step away from his defining Harry Potter role. He plays Ig, a small-town guy blamed for the murder of his long-time girlfriend Merrin (Juno Temple). Facing suspicion on all sides, he awakens one morning to find a pair of horns growing from his head which seem to have a strange effect on people. As the horns grow larger, Ig uses his newfound power to discover the real killer and achieve justice.

Horns hit cinemas in time to give audiences a few scares at Halloween, but if you missed it, high definition Blu-ray is the next best thing. The disc will also include a Making-Of feature looking at how director Alexandre Aja took the movie from page to screen. We Got This Covered has more info.