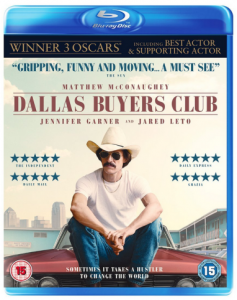 One of the most critically acclaimed movies of the year so far, Dallas Buyers Club, is set to be released on Blu-ray in the UK from 2nd June.

Matthew McConaughey won an Oscar for his deeply moving performance as Ron Woodrof, a redneck cowboy and self-confessed homophobe diagnosed with Aids in the 1980s. When Ron’s doctor gives him only thirty days to live, he desperately seeks out alternative medicines. On hearing about AZT, a new drug not yet approved in the US, he sets up a “buyers club”, where HIV positive patients can buy the new medicine. McConaughey’s stunning performance is backed up by an Oscar winning Jared Leto and Jennifer Garner.

The Blu-ray will come with an engaging and substantive piece on the making of the movie. It also comprises deleted and extended scenes, giving you extra insight into this “exceptional” movie.

For more information, head over to Blu-ray.com.