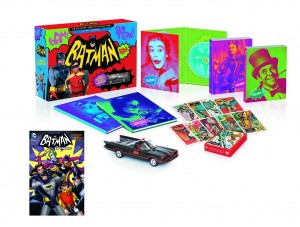 The classic Batman TV show will delight a new generation and its somewhat older, original devotees as it heads to Blu-ray. To celebrate this wonderful meander down memory lane, Warner Bros. has released clips to show the difference of quality between the original TV show and its high definition BD remaster. Joker, watch out! Batman and Robin can pull a punch like never before! POW!

Long before Michael Keaton, Val Kilmer, Christian Bale or Ben Affleck donned the cape and cowl, Batman was a 1960s live action television series, based on the DC comic book character of the same name. It starred Adam West as Batman and Burt Ward as Robin — two crime-fighting heroes who defend Gotham City. A total of 120 episodes graced the airwaves.  It was knowingly naff and famed for weaving in simple moral lessons for its young viewers, such as the importance of doing your homework, eating vegetables and drinking milk.

The footage has never been clearer, camper and brighter. Enjoy the capes and capers, the goodies, the baddies, the latex and leotards.

The Complete TV Series is out on November 10th in the UK, along with a bulging party bag of goodies, which includes a Hot Wheels Batmobile, playing cards, the Adam West Photobook with never-before seen images from Adam West’s private archives, and an Ultraviolet Digital Copy of each of the three seasons. There are many more extras wrapped into the Blu-ray limited edition.  Bleeding Cool has a complete list.