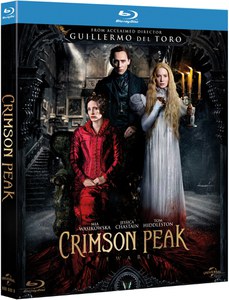 Guillermo del Toro, one of the heavyweights of fantasy filmmaking, returns to our screens as the director of Crimson Peak, which lands on Blu-ray on 22nd February 2016.

The film, which stars Mia Wasikowska, Jessica Chastain, Tom Hiddleston and Charlie Hunnam, follows the story of Edith Cushing, a young girl who falls in love with a stranger, marries him, and moves in to a creepy estate back in England. However, all is not what it seems, and it soon becomes apparent that the mansion houses a number of ghosts and mysteries waiting to be solved.

Crimson Peak includes a number of special features, including commentary by Guillermo del Toro, a look at the set and a number of deleted scenes.

With Del Toro’s lavish visual style, this is a film which will look strong on Blu-ray.