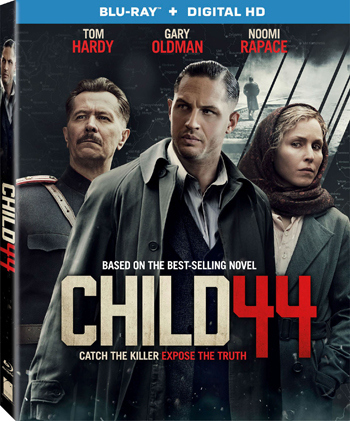 Period thriller Child 44, about the hunt for a Soviet-era serial killer, will be available on Blu-ray from August 24th.

Based on the first novel of the international best-selling trilogy by Tom Rob Smith and produced by the acclaimed Ridley Scott, the nail-biting thriller stars Tom Hardy as a disgraced MGB agent (Leo Demidov) who tries to track down the killer of dozens of children. Leo convinces his new boss (Gary Oldman) that the deranged serial killer is still on the loose-and must be stopped before he strikes again. The story is based on the real-life crimes of Andrei Chikatilo, known as the ‘Rostov Ripper’ who was convicted for 52 murders in the Soviet Union.

Russia actually banned the film based on “the distortion of historical facts and interpretations of events before, during and after the Great Patriotic War [World War II].”

The Blu-ray version comes with special features including a piece on ‘reflections of history’.