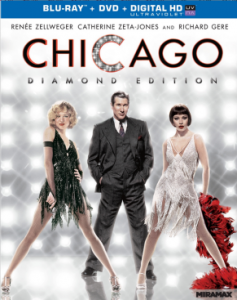 Lionsgate Films has confirmed that Chicago, the show-stopping musical about betrayal, revenge and murder in the windy city, will be coming back to Blu-ray with an exclusive Diamond Edition.

Set in the 1920s, this rip-roaring adaptation of the Broadway smash tells a pe

rverse tale of justice for two guilty murderesses in an era when celebrity and fame are prized above all else. With an all-star cast including Renée Zellweger, Catherine Zeta-Jones and Richard Gere it’s no surprise that this movie bagged an astounding six Oscars, including the coveted Best Picture award.

The Diamond Edition Blu-ray boasts some stunning special features, including a new retrospective documentary with the cast and crew, a performance of the musical number “Class” with Catherine Zeta-Jones and Queen Latifah, and for the first time ever, a 7.1 Dolby True HD audio track.

European release dates are still to be confirmed, so for more info, check out Blu-ray.com.