30 years ago, director James Cameron released his sequel to one of the most iconic and terrifying science fiction films of all time: Alien. Cameron’s action-packed film, Aliens, is now on its way back to Blu-ray in a special 30th Anniversary edition to be released in September. 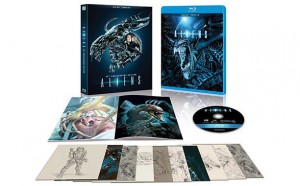 sole survivor from mankind’s first encounter with the mysterious and terrifying Alien. Her account of the events in the first film are received with skepticism – until the unexplained disappearance of colonists on LV-426 lead her to join a team of high-tech colonial marines sent in to investigate.

Personally supervised by James Cameron, this special edition includes scenes eliminated prior to the film’s 1986 release which broaden the narrative scope and enrich the emotional impact of the film. Special features are yet to be confirmed, but images from Twentieth Century Fox suggest we could be in for a treat. For more on the disc and other celebrations to mark the anniversary, head over to AV Club.