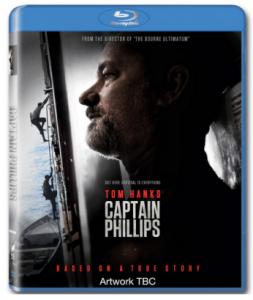 The nail bitingly tense Captain Philips, up for six Academy Awards, is due to hit Blu-ray in the UK from 10th February.

Based on the 2009 hijacking of U.S. container ship, the Maersk Alabama, by a crew of Somali pirates, this docu-drama expertly captures events as they unfold. According to critics, the movie gets “nail bitingly intense”, with Tom Hanks giving “the performance of  a lifetime” as Captain Philips, the man in charge of the ship. Add to that the painstakingly reconstructed scenes and expert use of a handheld camera by director Paul Greengrass, this movie is definitely one not to miss on Blu-ray.

The Blu-ray comes with an audio commentary and a feature examining the real-life 2009 hijacking.  Head to High Def Digest for a full Blu-ray review.